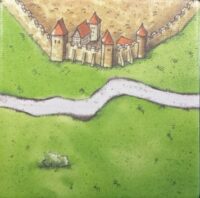 In the game of Carcassonne, it has been a long time the starting player is believed to have an advantage. The starting player has the first chance to get 4 easy points by closing a small city, and has one more turn over the whole game. However, so far there is lack of large-scale analysis on skilled players about how this is reflected on the winning chances, and number of points the first player gets compared to that of the second player.

This study used the games from the European Team Carcassonne Online Championship 2020 in order to get some statistics of the first player’s advantage among top players. In the European Team Carcassonne Online Championship 2020, the base game is used. Players in each duel use best of three to decide the winner and the players take turn to become the first player. This in certain extend reduces the effect of skill level discrepancy on the analysis.

For the purpose of this study, those games whose results are 1-0 or 0-1 are not counted. There are in total 599 valid games. 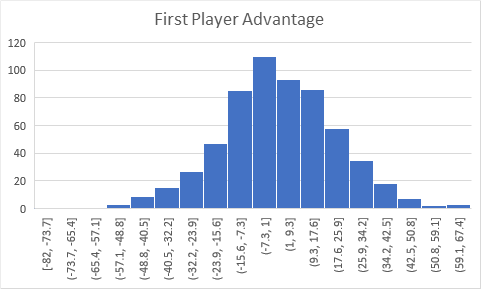 In conclusion, the first player has around 2 points advantage compared to the second player in the game of Carcassonne.

Author’s thanks: To Carcassonne.cat for organizing the tournament, and for everyone who contributes, including the idea of research, providing the results after the matches, and making the starting players