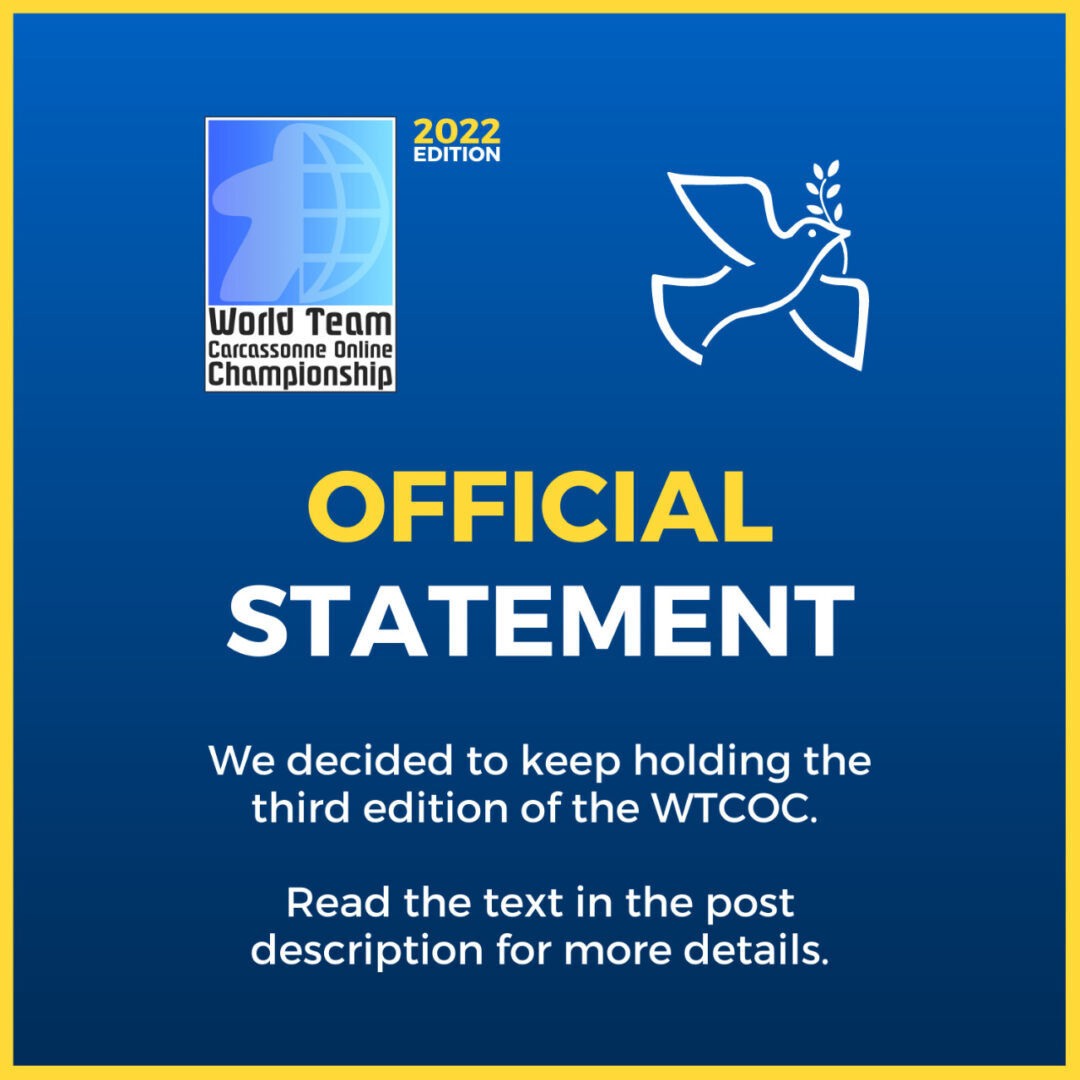 As you may know, we recently announced that there was some doubt over whether we felt it was right for the next WTCOC to go ahead in light of the current state of war between Russia and Ukraine, and it is now time to share the group’s decision in this respect. This decision has not been taken lightly; it was discussed between the representatives of Carcassonne.cat, Carcassonne Brazil, Carcassonne Mexico, Carcassonne Romania, Carcassonne USA and Carcassonne Central, taking into account the answers received from the captains of all teams pre-registered for the competition.

In making a final decision it was important to make sure that all voices were heard, and that all views and opinions were considered equally. We took this very seriously and worked hard to ensure that no single group, team or individual had any more responsibility than any other in terms of the decision that we arrived at together. Because while it hasn’t been possible to reach a decision that was universally agreed upon by all those involved, it has become necessary now to move forward on behalf of the majority of those who responded to express their opinion. Thank you so much to everyone who shared their thoughts.

Playing Carcassonne is something that brings great joy for many of us, and the fact that we can share our passion for this wonderful game internationally, and use it to form friendships all around the world is one of the huge benefits that the WTCOC brought us in 2020 and 2021. At a time when the world is being divided, Carcassonne is a beacon of global friendship and mutual respect that ought to be shining as brightly as possible. Especially now. And while we condemn the actions of the Russian government, the majority (although not all) of the feedback received expressed that the members of the Russian and Belarusian teams shouldn’t be penalised for the actions of their governments in terms of their eligibility to take part in the next WTCOC. Both teams however will be competing under independent names/flags that are yet to be decided upon, but which will not be their national names/flags.

We request your understanding and appreciation of what a difficult decision this has been to make, and urge you not to underestimate the amount of time and effort that was spent trying to find a solution that satisfies as many people as possible. And while we can now start getting excited about the upcoming tournament, let’s also be respectful of the fact that this course of action was not the preference for some teams/ organisations and that many people besides those in Ukraine and Russia/ Belarus have strong feelings about the current situation.

So without further ado, it just remains to say that the competition will be formally open for registration on Tuesday 12th April. The new registration process will be announced via the Carcassonne.cat website and on social media, and team captains will receive an email with detailed instructions on what to do next.

Yours in Carcassonne,
The WTCOC Organising Body