Find below the complete rules of The World Team Carcassonne Online Championship 2021.

Composite teams may be formed of players from two countries / regions that do not have enough players to form a team on their own, and ensuring a minimum number of 2 players of each country / region.

In order for the registration to take place, at least both parties must have a clear historical or geographical territorial affinity.

Teams may not consist of people from countries or regions already enrolled in other teams, unless they live in one of the two territories that make up the new team. Verification of this point may be requested by means of identification documents.

This type of registration must be validated by the arbitral tribunal of the competition according to the points set out above and will be the last resort to prevent a group wishing to participate in the competition from doing so.

The team will register under the name of the two countries / two regions / country and region, represented.

The expected tournament schedule is as follows (based on a participation of 24 teams):

Schedules may evolve depending on the participation. However, the intention is that each team plays one match per week.

In order to register your team, you need to fill in the following form with all the required information:

How many players are in a team?

Teams will be formed by a minimum of 6 players and a maximum of 10 players.

Once the competition has started, the teams that need it will be able to add players to their team if necessary. Changes will only be allowed to be made during the group stage.

Important: In order to ensure the smoot-running of the tournament, it is mandatory that at least half of the players of a team lined up during a match have a Premium BGA account during the duration of the tournament. For your information, a monthly subscription cost 4€.

All teams will be randomly assigned to different groups, depending on the number of participants. There will be 4 seeds that will not play against each other in the first phase, according to the results of WTCOC 2020 (Japan, Russia), EURO 2020 (Germany) and Copa America 2021 (Mexico).

Matches will be played round robin, which meaning that every team will play against every other team from its group.

For each match, every team will make a line-up of 5 players assigning each player a rank from 1 to 5. This lineup will be sent by the team’s captain to the organizers who will publish the duels to be played on the Carcassonne.cat website in a dedicated event page.

All the duels will have to be played simultaneously. Date and hour will be arranged by the two teams captains playing in a time frame of one week.

What happens for matches with Catalonia?

Catalonia must send their lineup within 36 hours before their match to a different group team captain. This captain will be able to confirm that the alignment of Catalonia conforms to what has been presented.

Players 1, 3 and 5 from the home team (left of table) and players 2 and 4 from away teams will create games. All of these players are Premium players according to the rules.The player creating the first game must push the “propose rematch” button in order to start the second game. If both players won one of the games and need to play a new third game the player who created the first and second games must push the “propose rematch” button again to ensure the sequence A-B-A where A is the starting player.

Which are the captain’s tasks?

Your lineup has to be sent at least 24 hours before the beginning of your match.

Only exception is for Catalonia who will have to send it at least 36 hours before the beginning of the match.

In case one player gets an emergency and is not able to play his duel, the team will be allowed to replace him by another player.

The player who runs out of time, as long as it is not out of their control (lack of internet connection, major unforeseen events …) will have to concede the game. We ask for the utmost honesty from all participants in this regard.

Those matches will be played on Sunday of the current week acording a series of schedules. These will depend on the continental origin of the team:

Regarding the waiting time of the player who shows up for the duel on time, he is asked to give a margin of between 15 minutes minimum and 30 maximum to the player who has not appeared. After 15 minutes, the player who is waiting can give the duel won in his favor by the result of 2-0

In order to win a match, the team has to win 3 duels. This means that If both teams have 4 players available and the result is 2 duels to 2, both teams will be considered to have lost.

Whether or not the team is complete, each participating player will do so according to the role established by the previously sent line-up.

It is mandatory to fill in the spreadsheet of the results after the matches.

How is the classification made?

Example: Germany wins against Catalonia 4 duels to 1 with 9 games won and 3 games lost.

The winning team will get a commemorative medal for each of its members. Likewise, the first three teams will be presented with a personalized badge from their country.

Which third-party tools are allowed?

As organizers, we hope fair play from all the teams.

Two members of Carcassonne.cat who will not play the tournament will be designated to rule the possible conflicts and rules misinterpretations in order to assure the highest level  of fairplay.

Duel: a duel refers to the confrontation between two players. The score of a duel will be determined by the result  of 2 or 3 games. Possible scores of a duel will be: 2-0, 2-1 and vice versa. The winner of a duel gives 1 point to his team. 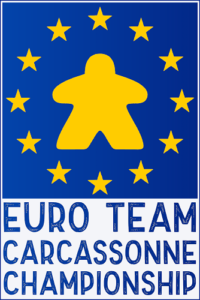